As previously mentioned, last night I attended a discussion of the recent published book, The KGB File of Andrei Sakharov (edited by Amnesty International's Joshua Rubenstein and former Soviet dissident/Sakharov Center archivist Alexander Gribanov) at Harvard's Davis Center for Russian and Eurasian Studies. The event was held in a small room with perhaps 25 people in attendance, most of them over 60; notable guests included historian Richard Pipes, the author of several books on Russian history, and Loren Graham, an MIT professor who specializes in the history of science. Also in attendance, as something of a surprise guest, was Sakharov's widow (and a human rights activist in her own right) Elena Bonner, who now spends most of her time in the Boston area where her daughter and grandchildren have resided since the 1980s.

Sakharov was one of the true heroes of the 20th Century: a man who occupied a position of wealth and privilege in Soviet society as the inventor of the hydrogen bomb, and who chose to become a persecuted outcast because he took a principled position for freedom and human rights. Much of the discussion touched on the ways in which Sakharov and the other dissidents paved the way for the Gorbachev-era changes that eventually toppled the Soviet regime. Yes, the changes were initiated within the communist power structure -- but the dissidents who were working on the outside helped frame the discussion of the changes that were needed, and set the goalposts. The dissidents were the first to state openly that the Soviet Union had placed itself outside the community of civilized nations by denying its people civic and political freedom and by squelching intellectual pluralism. By the late 1980s, this view had become part of mainstream Soviet discourse.

Joshua Rubenstein concluded his remarks on a somewhat pessimistic note, saying that in view of Russia's backsliding toward authoritarianism under the Putin presidency, it was hard to assess at this point just how much influence the Sakharov legacy really had. He was strongly challenged by Loren Graham, who said that however disappointing the Putin regime may be, the fact is that Russia today is full of independent groups and organizations, and full of people who are "striking free intellectually" -- and that's the legacy of the human rights movement and the Sakharov legacy. Gribanov weighed in with a fascinating story about interviewing some Hungarian human rights/pro-democracy activists and asking if they had been influenced by the Soviet dissidents. Their answer was, Not directly -- the workers' movement in Poland was actually a greater influence. And yet "the fact that at the heart of the monster, the Soviet Union, there was a man who challenged that monster -- Sakharov -- was inspirational."

In her brief remarks, Bonner said that the main danger she saw to Sakharov's legacy was that it would be appropriate and distorted by the new statist regime in Russia. Her concern is that, especially after she passes away (which, she wryly noted, is "a distinct possibility" -- she is 83 and in fragile health), Sakharov, an agnostic and a proud secular humanist, will be recast as "a Russian Orthodox saint," "a Russian patriot with a nationalistic flavor," and a supporter of what Putin and his ilk call "guided democracy." The only hope of averting this, she said, lies in "an educated populace" which will prevent this lie from taking hold. ("A very faint hope," added Bonner's daughter and interpreter, Tatiana Yankelevich.)

Contemporary political issues found their way into the discussion. Rubenstein talked about the fact that the KGB reports on Sakharov usually presented the Soviet Politburo with a distorted version of reality, telling the Soviet leaders what they wanted to hear, and that the KGB and the Politburo ended up believing in their own fictions. In her comments, Bonner noted that there was a lesson in this for the current U.S. administration.

This prompted an elderly gentleman in the audience to wistfully remark, during the discussion, that it was a pity we didn't have a Sakharov of our own to speak truth to power; whereupon Pipes rather irritably interjected to ask if the gentleman really was implying that Americans don't have the freedom to speak out against Bush, or that they risk internal exile to a small town (the way Sakharov was exiled to Gorky) if they do so. No, the gentleman replied meekly, but they don't seem to be able to make themselves heard.

Of course, comparisons between dissent in the former Soviet Union and disagreement with the government in the United States are absurdly and offensively facile; and I'm sure Bonner meant nothing of the sort. But her comparison of the Soviet leadership's self-inflicted disinformation to the Bush administration's policies was provocative in a good way -- and startling, since Bonner has long been a strong proponent of the use of American power as a force for good in foreign policy.

For me, the evening had an odd aura of Cold War nostalgia. It's not that I miss the Soviet Union; but the discussion of Sakharov, and Western support for his cause, evoked a simpler time when democracy's global adversary was a totalitarian empire with a single center in Moscow, not an amorphous terror network that comprises many different forces with often different goals. But then again, even in the Cold War era, good and evil were never simple. At the post-discussion reception, a man in attendance approached Bonner to ask if the human rights movement in the Soviet Union was at all influenced by the antiwar movement in the United States during the Vietnam War. The irascible Bonner lit into him, telling him that regardless of its intentions, the anti-war movement was "objectively" responsible for the deaths and the enslavement of millions of Vietnamese by allowing Vietnam to fall into Communist hands.

Bonner's assessment of Vietnam and the antiwar movement may be controversial; but at least most people in the West today, regardless of political orientation, treat the nobility of the dissidents' cause as self-evident. And yet twenty years ago, the notion that the Soviets simply had a different conception of human rights still had some currency among respectable liberals in the West. Even some people who expressed great and genuine concern with the human rights situation in the Communist bloc, and with Sakharov's plight in particular -- such as New York Times columnist Anthony Lewis -- cringed at Ronald Reagans designation of the Soviet Union as "the evil empire," which they saw as crudely simplistic and likely to provoke the Soviets into a more "defiant" stance. Yet the Soviet dissidents had no quarrrel with the "evil empire" label.

Perhaps moral clarity, like many other things, is much easier in retrospect. 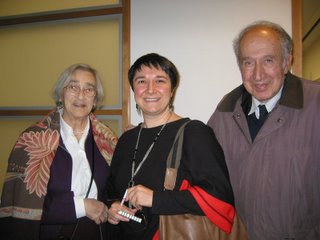 With Elena Bonner and Richard Pipes
Posted by Cathy Young at 10:54 PM

Interesting post! Has being a member of the Russian Orthodox church (publicly) become the defacto way to get access to the "good things" in Russia? Is it similar to being a "Party Member" in the Soviet era?

Hi hazel! sorry I'm getting to your question rather late.

It hasn't quite gotten to the "party member" stage yet, but I think it is getting to the point where being Russian Orthodox is becoming something of a sine qua non to being a "good citizen."

Too many marches against the Vietnam war were under the flag of North Vietnam, as anti-American, pro-communist radicals took advantage of the naivete of others.
Nevertheless, that no vital American interest was engaged by the war is proven by the fact that it was lost and nothing of consequence then happened to America. The dead died in vain.